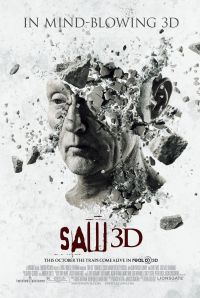 Note: Some storylines from earlier films are spoiled in this review.

I don’t know why I do it to myself. For the seventh – and hopefully final time – I endured the blood fest that is the Saw franchise.

“Saw VII” – or “Saw 3D” – or “Saw: The Final Chapter” – or “I’m Sure I Saw This One Before” – brings the popular but increasingly-jaded horror series to a blood-splattered end.

The first movie introduced us to Jigsaw, a sociopathic killer who punishes people he considers morally bankrupt by putting them in elaborate death traps which he calls “games”.  Their only chance of survival is to make some form of sacrifice in order to escape, allowing them to have a second chance at a life that he considers they have taken for granted.  And the first movie is really, really good.

Of course when you produce what is largely the same film six more times, it’s going to run out of steam eventually.  Add to that – and unfortunately it’s necessary to spoil the story arc somewhat to properly review this seventh installment – the fact that Jigsaw (Tobin Bell) dies half way through the series, the most compelling reason to watch died with him.

“Saw VII” opens with a flashback to the closing scenes of the first movie before cutting to a gathering crowd at a shop-front window.  In the window, two young men are strapped to opposite ends of a bench with buzz saws and a woman is suspended over a large saw in the middle.  Jigsaw’s messenger puppet Billy (pictured) cycles in to view and instructs the men that the woman is a harlot who has been playing them against each other.  Their choice is to try to kill each other in the next sixty seconds and save her – or let her slowly descend on to a saw.  And so sets the tone for another series of depraved and hard-to-watch death scenes that are admirable in some cases for their invention, but, equally, seem to feel just a little played-out at this point.

Outside of the slicing through and chopping off of body parts is a semblance of storyline.  Jigsaw’s work is carried on by Detective Mark Hoffman (Costas Mandylor) who survived his attempted murder by Jigsaw’s widow Jill Tuck (Betsy Russell) in the sixth movie.  Tuck goes to internal affairs detective Matt Gibson (Chad Donella) and promises to testify against Hoffman if she is granted immunity.  He pops her in a safe house and heads off to apprehend Hoffman, a man he has history with.

Meanwhile, Hoffman is kicking off Jigsaw’s next game.  He kidnaps Bobby Dagen (Sean Patrick Flanery – “The Boondock Saints”), a man who has amassed wealth and fame by falsely claiming to have survived a Jigsaw game.  Bobby awakens in an abandoned building and is instructed by the helpful Billy that he must navigate a series of obstacles in sixty minutes to save his wife’s life.  Along the way he’ll encounter and have to save the lives of his best friend, his lawyer and his PR person – all complicit in his lies according to Jigsaw.

If you’ve seen the previous “Saw” movies then this one won’t do much for you.  In fact the main storyline of VII – where the protagonist has to pass a series of tests in sixty minutes – is far too similar to the storyline of VI.  And VI was marginally better.

The cast of the “Saw” movies are never going to win any awards (the best performer was always Tobin Bell and he shines when he’s briefly on screen here (despite his death he makes appearances in all the movies)).  But in the context of a gore-filled horror movie nobody is expecting Academy Award-level turns anyway.  The whole production is slick, fast-moving and well-directed.  The dialogue is polished and coherent.  But yet “Saw” is less than the sum of its parts.

However it’s an artistically-limping franchise that has pulled in just south of a billion dollars worldwide gross.  So that’s probably the only sum that matters at this point.