There is so much ageism in Hollywood these days with plenty of top notch actresses unable to get a suitable role once they turn 40.  Well I’m here to address the balance.

I present to you the Sexiest Sixties XI – women who are old enough to be my mother! 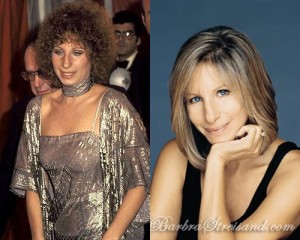 Known for: Singing, acting and that nose.

Most awesome thing: Being a woman in love.

The Lowdown: I know a lot of people might prefer to poke themselves in the eye with a stiletto than get down to it with Barbara but that position needs serious review.  Streisand is one of the most celebrated singers of our time and her list of classic performances such as “A Woman in Love”, “The Way We Were” and “Guilty” will see her ranked as one of the greats of all time.

But of course this blog is about how sexy she is and I think she comes off pretty well for a woman of her vintage.  The nose is character building and she rebounded wonderfully from that awful early-80s perm that made her look like a bustier Kevin Keegan.  She carries herself as a lady of class but of course the paps will always catch these ageing, made-up stars at their worst.  But I’d still re-enact some of those hot scenes from “The Prince of Tides” with her. 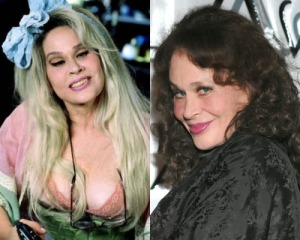 Known for: Getting an Oscar nomination in the 70s before retiring to “straight-to-video” fare for 30 years.

Most awesome thing: The Rollerblade Seven.

The Lowdown: Karen must have known the gig was up when she agreed to star in David G Jackson’s cult movie “The Rollerblade Seven”, a film that kick-started the obscure cult “Zen” film making style in 1991.  From Wikipedia: “This film follows a non-linear storyline and is riddled with strange and unexpected edits and dialogue. Several scenes, for example, are repeated over ten times in a row, seemingly without rhyme or reason.”  It is quite mental.  I watched it (mainly on fast forward). It also stars JOE Estevez and FRANK Stallone if that’s any indication as to its level.

Anyway Black picked up an Oscar nomination in 1970 for “Five Easy Pieces” and has other top credits to her name such as “Easy Rider”, “The Great Gatsby” and “Airport 1975” – but she became more associated with b-movie horrors like “Children of the Corn IV”, “Mirror Mirror”, “House of 1000 Corpses”, “Evil Spirits”, “It’s Alive III” – you can see where this is going.  She most recently received an award for her performance in the critically-acclaimed movie “Firecracker” which critic Roger Ebert hailed as one of the best of 2005.

She is brilliant though – voluptuous, oozing sexuality and a fine actress to boot. Her career was summed up by her appearance as a character in “Family Guy” which was followed by newscaster Tom Tucker saying “Karen Black, what an obscure reference”.

She has written and performed her own music and has also turned to play-writing now.

Known for: Leaving her violent husband and re-inventing herself.

Most awesome thing: We Don’t Need Another Hero from Mad Max III.

The Lowdown: The first thing any artist should plan is to write a hit single that will allow them to retire on the royalties.  Robbie Williams did it with “Millennium”, Queen with “We Are the Champions” and Tina Turner with “The Best”.

TIna was a looker in the sixties and seventies but was left black-and-blue by her violent husband Ike, with whom she had a successful musical career.  It looked like her solo career would never take off, her two late seventies albums “Rough” and “Love Explosion” both flops.  But she went on to become the most successful solo female artist of all time, all the time managing to maintain incredible legs even as she inches towards 70.  Wonderful talent, wonderful figure, wonderful wigs…

From: The Bronx, NY

Most awesome thing: The song about me.

The Lowdown: It’s been an up-and-down career for the pop-rocker who arguably peaked with 1972’s “You’re So Vain” and rebounded occasionally with the likes of “Nobody Does It Better”, 1987’s “Coming Around Again” and 2005 surprise hit album “Moonlight Serenade”.

Carly has come across as sexy, cute and bohemian over the years.  Her current look is very sexy, reminiscent of a female Steven Tyler (prominent mouth included).  And if you needed some evidence… 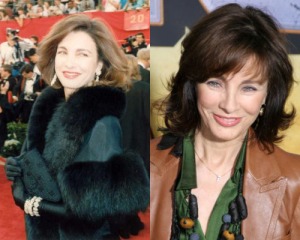 Known for: Being a bit under-appreciated.

Most awesome thing: Being naked in London’s West End.

The Lowdown: Her breakthrough role was as Michael Douglas’ wife in “Fatal Attraction” for which she was Oscar nominated.  But since then her success has been limited on the big screen, her most high-profile being the unexciting role as Harrison Ford’s wife in the dull political thrillers “Patriot Games” and “Clear and Present Danger”.  Unfortunately I was unable to catch her performance in the London’s West End stage production of “The Graduate”.  And, yes, she got her kit off.

From her glamorous fur coat look of the late 80s to her graceful, understated look of today, Archer is one cool chick – with the exception of her affiliation with Scientology.  I guess I could just fake interest.

Known for: Winning awards all the time.

Most awesome thing: Could be this?

The Lowdown: Where does one start when it comes to Helen Mirren?  “Cal”, “Excalibur”, “The Cook, The Thief, His Wife and Her Lover”, “The Long Good Friday”, “Caligula”, “The Madness of King George”, “Gosford Park”, “The Queen” and “Prime Suspect”.

So her talent is not in dispute.  But how did Helen Mirren become a sex symbol in her fifties?  Her nineties role as Detective Jane Tennison in “Prime Suspect” brought her to mainstream television and she followed this with Academy Award nominations for “The Madness of King George”, “Gosford Park” and – eventually – an Oscar for “The Queen”.

Described as the thinking man’s sex symbol, Mirren dresses well, speaks well, looks great, probably smells great and hasn’t spoilt herself with plastic surgery.  But she’d probably look even better if she did. 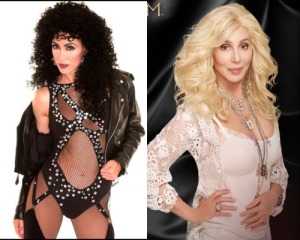 Known for: Outrageous dominatrix-style wear of the 80s.

The Lowdown: Even as a pubescent teen in the mid 80s I thought the near-naked Cher (left) was about as sexy as this.  Whether it was she, or her agent, someone got a clue.  Her future videos were way classier and the music was just as good (“Heart of Stone”, “Just Like Jesse James”, “Love and Understanding”). But she found renown as an actress too, her turns in “Mask”, “Moonstruck”, “The Witches of Eastwick” and “Suspect” well regarded.

Her face and body may be mainly cosmetically created but that’s neither here nor there.  She has a killer body, a pretty face, a great voice, charisma and a steely determination.  Frankly, she’s hot as hell.

Known for: It should be for her brilliant “Seinfeld” appearance in “The Summer of George”: (“If you bring it up again I will feed your genitals to a wolf”).

Most awesome thing: Are you kidding me?

The Lowdown: If Welch retired in 1966 she would be forever remembered for much-talked about roles in “One Million Years BC” and “Fantastic Voyage”.  As it was her movie career became a footnote as numerous seventies outings bombed.  She gave up trying to break the box office and ended up in TV movies like “Torch Song” and “Right to Die”.

She kept the coffers filled up by suing MGM for $15m after she was fired suddenly on the set of “Cannery Row” in 1982 but found her niche by promoting beauty products and fitness videos.

But, more relevantly, she is absolutely stunning even in her late 60s.

Known for: Living with Kurt Russell for 25 years and not getting married – good for them!

Most awesome thing: It might have been a flop – and it might be a body double but “Criss Cross” gave us this.

The Lowdown: Goldie was never a consistent box-office performer.  Her first Academy recognition was in 1970 for “Cactus Flower” and she received a further nomination nine years later for “Private Benjamin”.  But around those two landmark moments were panned movies like “Lovers and Liars”, “Wildcats”, “The Out-Of-Towners” and “Housesitter”.  She found huge success in commercial hits like “Overboard”, “Bird on a Wire”, “The First Wives Club” and “The Banger Sister”.

All the while Goldie was adored in the media; sweet, approachable and charming.  She jogs with Russell and keeps herself in great shape as you can see above.  My childhood crush remains intact 25 years on.

Most awesome thing: Her underwear?  Maybe?

The Lowdown: I know it probably looks like I’m all about the ditzy blonde – and maybe I am.  But look at Suzanne Somers … yowza!

She made me feel all funny when playing Chrissy Snow in flare-heavy seventies sitcom “Three’s Company” (I was REALLY bummed when they replaced her with Cindy and then Terri).  And then she disappeared.

If you looked carefully you could find her advertising the thighmaster for a while in the eighties, doing some nude shots for “Playboy” and starring in early-nineties TV movie “Keeping Secrets” where she, rather easily, played herself.  Her TV comeback was in the sitcom “Step By Step” with Patrick Duffy (interestingly Duffy’s former “Dallas” co-star Ken Kercheval had starred in “Keeping Secrets” with Somers).

Anyway, I’m rambling.  Somers has made her millions peddling fashion, diet, beauty and exercise products on the Home Shopping Network and has also beaten breast cancer, choosing to be treated with mistletoe injections rather than chemotherapy.

While she has a very healthy lifestyle, she has the money to keep herself looking great.  I tell you, it’s money well spent.

Known for: The female half of “Bonnie and Clyde”

Most awesome thing: An Oscar for this performance.

The Lowdown: Dunaway has suffered in Hollywood recently like many of her age (see Karen Black, above).  But the celebrated actress has made her mark with a Best Actress “gong” (??) for “Network” and nominations for “Bonnie and Clyde” and “Chinatown” (all three movies have average ratings on IMDB in excess of 8.00.

Talented and beautiful, Faye has maintained a dignified presence over all the years she has been in the public eye.  Today she comes across as bright and classy, with a confident and smouldering sexuality as you can see in this interview with Jonathan Ross.

How much do I love her?  Well I bought the film “Drunks” because she was in it.  That’s the ultimate sacrifice.

Those who are just too old…