Denzel has done it again, and Ethan has done it for the first time. Both men are nominated for Academy Awards for their respective performances in good cop/bad copy thriller, “Training Day”. Before viewing the movie, it might surprise some that such a seemingly formulaic movie has got in amongst the top Oscar nomination categories this year. But although on the surface that is the case, “Training Day” has enough style, substance and tension to ensure it will be recognised as one of the years better movies. 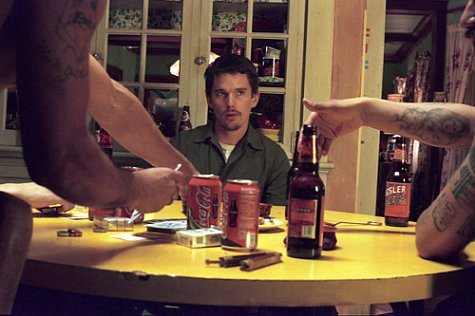 Young cop, Jake Hoyt (Hawke – “Alive”, “Gattaca”, “Before Sunrise”, “Reality Bites”), is getting his big break – a chance to impress narcotics division team lead, Alonzo Harris (Wahsington – “Remember the Titans”, “The Hurricane”, “The Bone Collector”, “Fallen”, “Philadephia”). Alonzo takes Jake out on a ‘training day’ with the promise that if he impresses, he will get the opportunity to join the team and help further his ambition to eventually make detective. Immediately he becomes involved in the seedier side of the job – a raid on the house of a drug dealer, the Sandman (his wife played by singer Macy Gray), a trip into the heart of intimidating South Central LA and a rendez-vouz with Alonzo’s fairly unfriendly narcotics team who seem to be planning something big. The plan they are hatching is something that will change Jake’s career forever and he now must make a choice on which path he wants to follow for the rest of his life.

Thanks to some genuine plot twists and a wonderful performance from Washington, “Training Day” manages to avoid 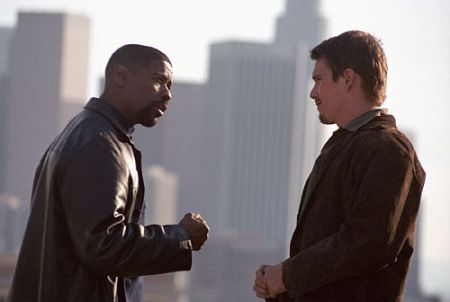 being too predictable and hackneyed. Director, Fuqua (“The Replacement Killers”), doesn’t stray too far from familiarity but the story remains tight and maintains intrigue mainly due to it all being based in the course of one day. David Ayre’s screenplay (“Fast and the Furious”) might not have had the same impact if it wasn’t for the casts excellent turns. Washington is undoubtedly the star as Alonzo Harris. He lights the screen as the hard-ass but likeable and seemingly trustworthy cop. Later on we see the other side of Harris – a cop who uses people and situations to further his aspirations. Throughout he remains powerful and convincing when on screen and carries the movie like few actors could. If Denzel had said no to this, then you feel it might have next fallen to Laurence Fishburne, a decent actor who probably would have been unable to produce this kind of stirring turn. Ethan Hawke also gets the opportunity to make up for a disappointing career thus far, as the other half of the double act. Although subdued at times, he pulls out some great scenes, no less so than when his back is against the wall. 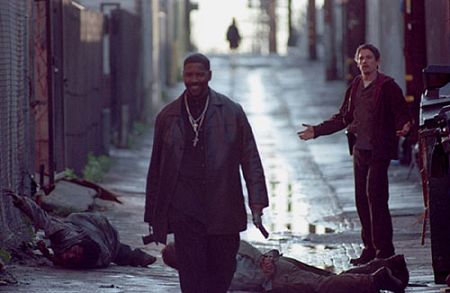 Things do start off a bit slow, but about half-way in the pace picks up, Although the direction of the movie turns on one of those convenient Hollywood coincidences, this can be forgiven for the sake of enjoyment. “Training Day” is a sparkling and well-delivered thriller.