When you hear the name ‘Zucker’, you probably think immediately of “Police Squad”, the “Naked Gun” series and “Top Secret”. What you don’t think of are the more serious prokects he has put his camera in front of such as 1995’s action adventure, “First Knight”, and 1990s romantic Oscar winner, “Ghost”. But “Rat Race” is a return to the more zany ways of the former movies. A 2001 version of “Cannonball Run” might be the best way of describing this hit and miss comedy. 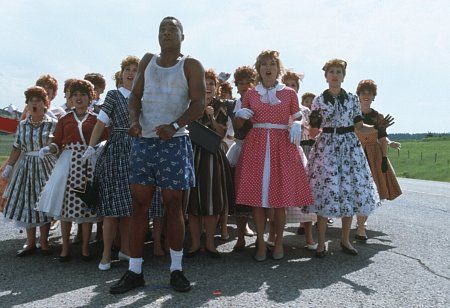 Eccentic Las Vegas casino owner, Donald Sinclair (Cleese – “Fish Called Wanda”, TVs “Monty Python” and “Fawlty Towers”), convinces a randomly assembled group of his hotels customers to race each other for a $2m prize located in a locker at a remote New Mexico train station. Each one gets a key, first one there keeps the lot. Meanwhile, Sinclair and his rich friends place bets on who will win by keeping tabs on each person through a transmitting device in each key. Cue a manic road movie involving the usual wide range of characters, some more annoying than others.

Barely bearable are Vera (Goldberg – “Girl Interrupted”, “Ghost”, “Boys on the Side”, “Corrina Corrina”) and Merrill (Chapman – “White Men Can’t Jump”, TVs “Space Above and Beyond”) as the re-united mother and daughter whose reluctance to buy a squirrel from an uncredited Kathy Bates takes them on an unplanned detour. Randy (Lovitz – “Little Nicky”, “Small Time Crooks”, “The Great White Hype”, “City Slickers”) the man with the family from hell (Kathy Najimy is his bouncy but slightly neurotic wife), dreams of leaving his pen-pushing job behind forever. His decision to steal Hitlers car gives him a few more problems than he might have expected.

Didn’t Cuba Gooding Jnr (“Pearl Harbour”, “Men of Honour”, “As Good as it Gets”, “Jerry Maguire”, Judgment Night”) win an Oscar not too long ago? He plays Owen, a failed referee whose high profile slip up during a big football game cost many people a lot of money…there’s every chance they’ll recognise him. Nick Schaffer (Meyer – “Road Trip”, “The Insider”, “The Craft”) is a budding lawyer who finds himself breaking the rules for the first time as his pursuit of love turns into a pursuit for the $2m. The final participants are Italian playboy Enrico, an annoying turn by Mr Bean himself, Rowan Atkinson (TVs “Mr Bean”, “Maybe Baby”, “Hot Shots Part Deux”, “Four Weddings and a Funeral”), and bumbling brothers Duane (Green – “Austin Powers”, “White Mans Burden”) and Blaine (Vieluf – “American Werewolf in Paris”) whose encounter with a cow and a hot air balloon leads them off the beaten track.

Just like “Planes, Trains and Automobiles”, attempts to make a conventional straight-forward trip to New Mexico 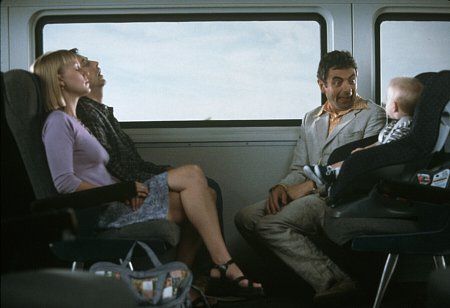 prove futile as each rival must take different means to reach their target. Admittedly, some of the scenarios are hilarious. Owen ends up driving a bus full of Lucille Ball look-a-likes, the Cody brothers hot-air balloon ride with the theiving key-cutter and a surprised cow, Randy’s inappropriate speech at a World War II convention (inspired by a similar hilarious scene in “Father Ted” I’d say) and Wayne Knight (Newman on “Seinfeld”) appears in a lively turn as the ill-fated driver delivering a live human heart to a hospital.

The seen-it-before storyline, annoying characters as well as a dismal ending should be enough to drag “Rat Race” down to unwatchable status, but the comedy is sharp, jokes are clever and those characters that do work (Owen Templeton, the Cody brothers and Randy) deliver enough laughs to keep you entertained. It is a little hit-and-miss, but what quick-firing comedy isn’t?