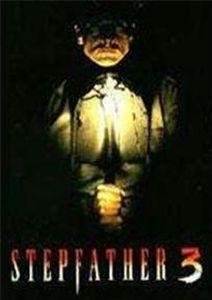 Terry O’Quinn received much acclaim for his performances in the first two “Stepfather” movies where he played a disturbed sociopath, dedicated to creating and being part of the perfect family unit.  While the first film was an outstanding cult chiller, the second one was more campy, notable only for O’Quinn’s turn.  The talented actor (who found international fame as John Locke in “Lost”) was – one would assume for either artistic or financial reasons – not involved in this direct-to-video second sequel in 1992.  So in steps Robert Wightman (briefly John-Boy Walton in The Waltons) as the maniacal titular character.

Changing the actor while not changing the character means that there needs to be some form of explanation as to why he looks different (unless it’s the Donna Reed/Barbara Bel Geddes switcheroo I suppose).  Director Guy Magar’s explanation, while being a reach, makes sense: The Stepfather (aka Henry Morrison, Jerry Blake, Bill Hodgkins, Gene Clifford) has escaped (again) from a maximum-security mental hospital.  Having been featured on every news broadcast around the country he decides to have plastic surgery so as to evade capture and continue his search for the perfect family.

The movie opens with a hooded man being operated on by a backstreet plastic surgeon who promises that’s he’s “the best there is” while he cuts and slices his patient without any anesthetic and with a bottle of whiskey nearby.  Some days later the bandages come off and The Stepfather is back … almost looking like a different person altogether.

We cut to a small Californian town where local gardener Keith Grant (Wightman) dresses as the Easter bunny and hands out eggs to the local community’s children at the urging of local priest Father Brennan (John Ingle – TV’s “General Hospital”, “Days of Our Lives”).  His unassuming charm interests single mother Christine Davis (Priscilla Barnes – TV’s “Three’s Company”, “Licence to Kill”, “Mallrats”, “The Devil’s Rejects”) and before long the two are involved in a whirlwind romance that leads to marriage in what seems about 4 days.

Her wheelchair-bound son Andy (David Tom – “Stay Tuned”, “Pleasantville”) is less impressed though, telling Father Brennan that there’s something not quite right about his new stepfather, who had no friends or family at the wedding and seems to change his back-story frequently.  No matter how hard Keith tries, he can’t make that connection with the crime-obsessed Andy who already suspects that Keith could be the escaped “step father” that he has seen on a TV news report.  The youngster uses his computer expertise (using the Internet and Photoshopping before they were common) to investigate Keith’s background.

Becoming disillusioned with his already-disintegrating relationship with his new family, Keith lines up Jennifer, a single mother who he has just rented his old cottage to.  But with Andy digging deeper and Father Brennan increasingly suspicious with Keith’s behaviour, time is running out for The Stepfather to make everything right.

“Stepfather III” came in for a bit of a battering at the time of release as one might expect.  Certainly when I first viewed it almost two decades ago I wasn’t that impressed.  But, on second viewing, the film – in the context of the franchise – has stood the test of time quite well.  I mean, come on, “The Stepfather”, quality film though it was, was a B-movie – shorn of gloss and rough around the edges.  And that’s what the third movie is – hampered slightly by a less-engaging lead man, admittedly.

In fairness to Robert Wightman he puts up a good fight in the role where O’Quinn set such a high watermark.  His syrupy, southern-accented, nice guy act is a little clunky but when required to go a bit mental, he pulls it off very well.  His facial mannerisms and general appearance is close enough to O’Quinn that you can almost buy in to the storyline that this is O’Quinn with a different face.

He’s in good company on set though.  David Tom does a convincing job as Andy and Priscilla Barnes was a good choice as The Stepfather’s lover (as were Shelley Hack and Meg Foster in the previous movies).

The violent scenes are not as hard-hitting as some of the ones we have seen previously and the entire film is undermined by the fact that we’ve seen it all before – and better.  But for a largely-disregarded, low budget thriller, “Stepfather III” is no embarrassment and worth a watch.