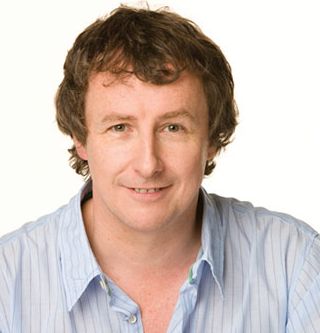 The former musician has carved a nice little niche for himself as the housewife’s favourite on Irish radio with latest listenership figures suggesting that about 69,000 people are tuning in from 9am to midday, Monday to Friday.

Who is Tom Dunne?

He forged a successful pop career in Ireland in the late eighties and early nineties as lead singer of Something Happens.  He found further fame as presenter of alternative music show Pet Sounds on commercial radio station Today FM for nine years until 2008 before moving to their sister station, Newstalk.

The move was viewed with great interest since – as the name suggests – Newstalk is a talk radio station.  It was also viewed with great relief by many as Dunne, playing the unintentional misogynist, replaced two female presenters, Brenda Power and Orla Barry.

A few months before his Newstalk show started in September 2008, I was at a table quiz that was won by a, um, table called The Tom Dunne Fan Club.  Yes, Tom Dunne’s persona had now taken on mythological qualities.  Never a person to listen to commercial radio I was therefore excited to hear what this new show – a mix of chat and music – would be like.  Anything would be better than the tiresome cackling that used to infest the latter part of the morning (see above).

First of all let me say that Tom Dunne comes across as a top bloke.  He’s warm, always in a good mood, can display genuine moments of wit and is an all round likable guy. The slots with John Fardy and George Byrne, who discuss movies and entertainment every week, are often worth listening to.

But, like many DJs, there are facets to his broadcasting which stick in the throat.  The bearability of any public figure is calculated by how much you enjoy their upside, deal with their quirks and tolerate their flaws.

After a couple of months of tuning in to Tom, I found myself being jaded by the show, only returning when there was really nothing else to do.  So what’s wrong exactly?

The only thing duller than someone talking about themselves is them talking about their kids.  It’s one thing to do it at an extended family barbecue, it’s another thing to do it frequently on national radio.  Tom clearly loves his family very much but the lengths he goes to in order to include references to his daughters is tiresome.  When I mentioned Tom to my dad he gave the very same reason as to why he stopped reading his newspaper column. Even my mates know not to bore me with news about their kids.  Sorry, Tom.

Tom takes a number of calls during his show and they almost always start like this:

Tom: How are you today?

Caller: Fine, Tom. And yourself?

What a waste of airtime.  He’s not the only one who does this and I realise it is just politeness but let’s mix it up a bit.  I look forward to some day hearing a DJ who, when asked how they are, responds glibly ‘awful!’ and then moves straight to the point of the call.  Keep the small talk for the accidental meeting with the neighbour you have nothing in common with.

Tom recounts a lot of activities from his personal life which can be good points of discussion and are not particularly objectionable.  Sometimes he will bring a debate he’s had with his father-in-law over dinner to the airwaves or ask listener’s opinions on how they might handle a particular domestic situation.  Whatever it is you can be sure that when Tom is done recounting the anecdote and then opining on what might occur if it happened in his environment, he will then sum up the whole thing with the closing remark “believe you, me”.  Sometimes he will repeat this for effect.  Only slower.  My grandmother used to say things like this along with the phrase “hen on a griddle”.

I wouldn’t call myself a prude but I don’t believe that overt sexual discussion belongs on daytime radio.  Tom seems to enjoy getting middle-aged authors (usually English or Australian) on air to discuss a book that lifts the lid on women’s liberation through sexuality.  More disturbing than that, it seems Tom is particularly clued in, like he actually cares about women’s sexuality.  It’s all about getting your leg over, you blouse!

I’m pretty sure Bruce could maintain his lifestyle based on royalties paid to him by the Tom Dunne Show alone – in fact “Tunnel of Love” has just finished right now.  But Tom goes through phases where his “pet sounds” are almost on constant spin.  At the beginning of his tenure it was the very ordinary Glasvegas who were on every day.  I’m not joking you.  And as for every Irish musician ever being “absolutely brilliant”…?

Joe the Producer sits in every day on the ‘coffee break’ (sponsored by Bewleys).  Nothing really happens.  It would be a reason to flip channels – if there were anywhere to flip to.

Very few people who call a radio show are interesting.  I know I wouldn’t be if I were on air – I’d be as trite as the next person.  So I have no interest in finding out what Seamus from Tullamore is doing at the weekend or if Ciaran from Blackwater is going on holidays this year.  Stop asking them Tom.  How about asking them which Olsen Twin they’d do – if they had to.

8. An inane trip in to someone’s personal family life

Tom: Are you up to anything this weekend, Peadar?

Peadar: Ah, my youngest is two on Sunday. We’re going up to the park.

Tom: Aw, lovely!  It’ll be a nice weekend for it they say.

Tom: Well I hope you have a great time. Lovely talking to you, Peadar.

Peadar: Thanks Tom. Love the show. All the best now.

Tom chuckles too much although he remains utterly charming through it all.

At least Brenda Power would have called Sky out on their ever-increasing subscription fee that flies in the face of decreasing utility and labour costs.  What chance that I could have an on-air discussion about the show’s sponsors?  But, hey, that Sky Plus is really awesome.  Even George Hook thinks so.

How about getting a bit “Gerry Ryan”, Tom?  Let’s insult some people.  Let’s have some controversy!  When talking to a middle-age English author about hormones, make a joke about hearing “whore moans” when in Fitzwilliam Square last weekend!  That would be awesome.

Otherwise the show remains one I dip in to the hope that there is an interesting discussion on subjects of relevance to me – not the correlation between the menstrual cycle and sexual desire.