Michael Keaton reappears from whatever cryogenic career-freeze he indulged in over the last few years to take the lead in yet another of those appealing spooky movies that everyone loves to watch. Think “Ghost”, “Stir of Echoes” and a touch of “The Ring” and you’ve got “White Noise” down pretty good.

After his writer wife Anna (West – “The Salton Sea”) dies in an accident one night, architect John Rivers (Keaton – “Batman”, “Beetlejuice”) spends the following months piecing his life back together again. After her death, a stranger called Raymond Price (McNiece – “From Hell”, “Hitchhiker’s Guide to the Galaxy”) tells him that Anna has contacted him from “the other side”. Although he dismisses Raymond at first, eerie calls from Anna’s switched-off mobile phone cause John to have a re-think.

He goes to see Raymond who tells him about EVP, an unexplained phenomena in which the dead seemingly contact the living through everyday technology like TVs and radio. He plays simple messages from Anna and intrigues John so much that he starts attempting to record his own EVP (Electronic Voice Phenomena). Before long he’s hearing disturbing voices and receiving messages that he interprets as his opportunity to help people who are in trouble. He befriends one of Raymond’s other clients, Sarah (Unger – “The Salton Sea”, “The Game”), and while they investigate the phenomena they begin to realise that there is something more sinister at work. 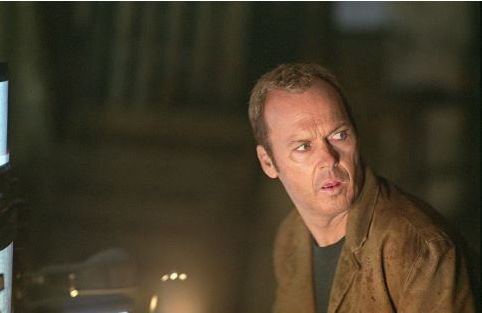 Michael Keaton is a somewhat niche actor who appeals to just about everyone – housewives (“Pacific Heights”), students (“Batman”), film buffs (“The Paper”) and families (“Beetlejuice”, “Jack Frost”). Likeable though he is, he doesn’t always add a layer to movies that come up short like, say, Rutger Hauer or Christopher Walken can. The whole cast of “White Noise” is clearly struggling to take anything dramatic out of the B-class script and Keaton just seems downright bored.

Director Geoffrey Sax has done little in the way of big screen action before and while he throws in the usual goose-pimple moments (effective panning, use of mirrors and shadows) he probably fails to elevate the script to where it needed to go. I was amused, like “The Ring”, at the use of “static” sounds and visual throughout the movie. As a kid, before the advent of 24 hour television, I always remember always being spooked out by static on TV. Even the radio static at 5am before programs started on some channels used to unsettle me a bit. Indeed maybe Sax is hoping that this focus will have the affect on me as a grown up. it doesn’t.

But more importantly, as the storyline itself unfolds, the eventual direction is something of a disappointment. There is the odd minor-league cliffhanger but the thrills are short-lived and not very memorable.

By no means a write-off of a movie but there are many better supernatural thrillers and therefore this one is somewhat redundant.