Charles Weyland (Henriksen), a rich industrialist, has spotted peculiar thermal activity in Antartica via one of his satellite systems. He believes that an ancient pyramid lies thousands of feet under the ice and puts together a team of archaeologists to investigate. Alexa Woods (Lathan) leads the team that includes historian Sebastian (Bova), scientist Graeme (Bremner) and rough-and-ready thermal miner Verheiden (Flanagan). Basically it’s your standard collection of movie stereotypes (c.f. “The Core”, “Event Horizon”, um, “Predator” and “Alien”!). 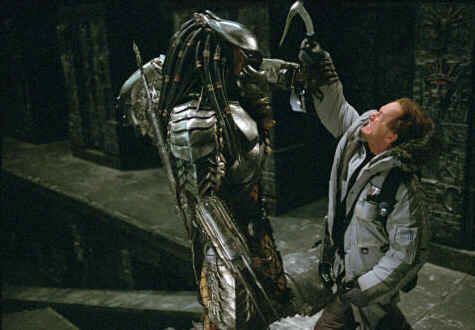 When they get there they find an abandoned whaling station from which all occupiers went missing in 1904. Even more bizarrely they find a newly-drilled underground route – a route that, according to satellite technology, didn’t exist 24 hours earlier. When the team go down they discover that Weyland was right – it is a pyramid. But what they don’t know is that it is home of an ancient alien species.

To be frank, it didn’t work. They had years to get this right, and it didn’t work. Director Paul Anderson was not a name that filled you with much hope for the outcome. Outside of the occasionally excellent “Resident Evil” his handling of big-screen movies has been moderate to say the least. In “Alien vs Preadtor” he struggles to elevate the action to anything resembling the brilliance of the first couple of Alien films or “Predator”.

The effects haven’t moved on all that much from the original “Predator” nearly twenty years ago. Now maybe that’s a conscious decision, to make the movie in the same spirit as the much loved 1987 version. To me it was a little disappointing not to have the Predator doing some cool new stuff or to enhance his presence in some way. The jungle, and even the city setting of the second movie, were far more exciting than the ancient pyramid that this one is set in.

Overall this movie is hard to talk-up. Worth a watch but more out of interest and for completist reasons than anything else. A sequel might happen but it’s time to wake up, Hollywood!