There’s something about an axe murderer that’s a little bit more frightening than other forms – not that I have a great deal of experience of course. But I suppose if you recount the way you’ve felt when watching a movie about said subject, the firing of a gun, strangulation, pushing someone off a cliff… they don’t quite have the same churning, disturbing impact as the thought of someone being murdered with an axe. You can be sure when a movie choses this as its central theme, that the intensity and drama is going to imprint itself far more than if the subject was killing with a sniper or via a killer dog or something. Vulgar thoughts, but often those are the ones that ring truest.

In “Frailty”, a serial axe murderer [dubbed the God’s Hand Killer] is the central theme. That axe murderer is unkonwn to the FBI despite the best efforts of Agent Wesley Doyle (Boothe – “Men of Honour”, “Joan of Arc”, “Nixon”, “Tombstone”). The investigation turns on its head when Fenton Meiks (McConaughey – “How to Lose a Guy in 10 Days”, “Reign of Fire”, “The Wedding Planner”, “Contact”, “A Time to Kill”) enters his office one rainy (obviously) night and identifies his brother Adam as the killer. Doyle is sceptical, and only slightly less so after Fenton recounts their childhood.

Through a series of flashbacks we see the simple family life of Fenton (played as a child by the very talented Matt O’Leary – “The Alamo”, “Domestic Disturbance”, Spy Kids 2″, “Spy Kids 3-D”), Adam (Jeremy Sumpter) and their father (Paxton – “Twister”, “Aliens”, “A Simple Plan”, “Titanic”) – their mother died when giving birth to Adam. They lead a normal blue-collar existence in Texas until one night their Dad tells them that God visited him. God tells Mr Meiks that it is he and his family’s job to track down demons on earth who are masquerading as humans and kill them. Further visits from angels will reveal who those people are and how the job is to be done. 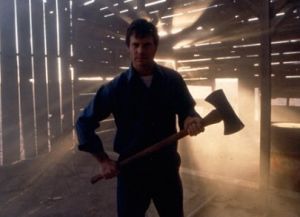 What do you know…this seems to make some sort of psychological impression on Fenton and Adam. Adam follows his father loyally, believing in his revelation, Fenton resists. Now, both grown up Fenton finally reveals to the cops that he believes the serial killer is Adam.

Bill Paxton makes his directorial debut here. Used to being a minor player in major movies (“Titanic”, “Aliens”, “Apollo 13”) and not a particularly talented one either, one would not expect the sharpest of performances from him behind the camera. You’d be dead wrong. This might be one of the most surprisingly adept movie debuts you’ll see. The story of “Frailty” is like a coil – tight and tense, it needs to be handled carefully to stop it springing free and out of control. Not to overstate things, Paxton directs at a level you might expect from Brian DePalma.

Critical to the movie is the investment you put in Fenton and Agent Doyle. From the beginning, the scene is set well – a dark office, late at night. The rain is falling, Fenton looking unkempt but alert – his question to Agent Doyle as to why he only has one picture of his mother in the office, bringing her in to the story for what seems to be little rhyme or reason at the time.

Forced to flash back twenty five years or so to tell the tail, and subsequently needing to employ kids to develop the plot, Paxton then shines on the other side of the camera, producing one of the most convincing performances of his career as an actor. He is helped undeniably by the ever-rising star of Matt O’Leary who put some guts in to the otherwise wimpy “Domestic Disturbance” with John Travolta.

I described in the first paragraph the uneasiness you feel when it comes to visualising an axe murderer and Paxton engages us with the subject matter without turning us off, or turning our stomachs. This is most definitely a psychological thriller rather than a gore-fest and it’s a film that builds true intrigue rather than building a feeling that you should be intrigued, which many big-name movies do (without pay-off I might add).

McConaughey is back on form here after starring in rather fluffy material like “How to Lose a Guy in 10 Days”. He’s creepy – but if you’d been through what he’s been through, you would be too. Boothe always reminds me of Tommy Lee Jones and I was left wondering if he was imagined for the role initially. As it is, Boothe is fine if a little generic.

“Frailty” really works and is genuinely scary and more thought-provoking than you would expect. The ending is real border-line genius/nonsense and if you’re tipping towards the latter after seeing it, a few days contemplation might point you the other way.

If Paxton finds another script of this ilk and level (Brent Hanley’s debut also), then there’s no reason why he can’t succeed where more established names have failed.