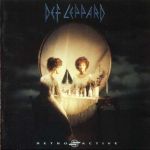 After playing the Freddie Mercury Tribute Concert at Wembley in 1992, and adding ex-Dio and Whitesnake guitarist, Vivian Campbell, into the lineup as a replacement for the Steve Clarke, the band released a stop-gap album in 1993. “Retroactive” was a collection of b-sides and rareties – a mix of ballads, raucous hard-edged rock and interesting cover-versions.

The first couple of tracks are from the “Hysteria” sessions, but were not completed until much later on. The gritty ‘Desert Song’ is a well-arranged rocker, ‘Fractured Love’ similarly is a well-produced rock-number that would have sounded at home on “Pyromania”. ‘She’s Too Tough’ was apparently written in 15 minutes but it has a curious and affable quality to it that deems those claims as doubtful, while ‘Ride Into the Sun’, the first song that Def Leppard recorded, is re-recorded for posterity and is pretty decent by all accounts.

Celtic folk-rock number ‘From the Inside’ is an interesting performance with Fiachna, Liam and Peter from the Houthouse Flowers. ‘I am bad, I am evil/I am winter, I am pain/I’ll mess up your life/I’ll beat up your life/I’ll lose all your friends/And I’ll win in the end’ laments Joe as he tells the story of addiction, bizzarely, from the drugs point of view. ‘Ring of Fire’ is another track from the “Hysteria” sessions but decent as it is, it clearly wouldn’t have had a chance of appearing on the album.

There are a few covers of course – both of tracks by glam acts. Sweet’s ‘Action’ and Mick Ronson’s terrific ‘Only After Dark’ are both very worthy – Ronson’s number having it’s wonderful groove emphasised by Phil’s impressive guitar work.

‘Miss You in a Heartbeat’ and ‘Two Steps Behind’ both appear in two versions. ‘Heartbeat’ is worked in a piano-based version as well as an electric version. The latter seems to come out the best but both versions are superb. Similarly ‘Two Steps Behind’ was originally done electrically before being recorded acoustically and put on the soundtrack for “The Last Action Hero”. Again, both versions are particularly strong and I don’t blame the band for including them.

While there’s nothing particularly outstanding on the album, there is a consistent quality to it, as well as an air of intrigue surrounding many of the tracks and the way they came about. A worthy purchse for any Def Leppard fan.