When a movie like “Vanilla Sky” hits the screens, you can imagine that it is going to divide the critics and the public like a knife through butter. And so it has. Cameron Crowe (director of “Jerry Maguire”, “Singles”, “Say Anything”, “Almost Famous”) puts the Hollywood spin on 1997 Spanish thriller, “Abre Los Ojos”, involving heavyweights like Tom Cruise, Cameron Diaz, Kurt Russell and, as it turns out, rather intriguingly, Penelope Cruz. This is of course the movie set where Cruise and Cruz met and started the relationship which ended one of Hollywood’s most enduring marriages.

So what’s it all about? I’m not sure I know yet! 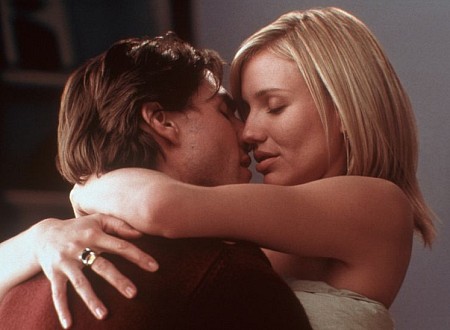 But lets try and explain as much as we can without spoiling the whole thing. David Aames (Cruise – “Mission Impossible”, “Magnolia”, “Eyes Wide Shut”, “Jerry Maguire”) is a hot-shot New York businessman who lives in the fast lane – big apartment, best clothes, best looking women and not a care in the world. He is sleeping with ‘friend’, Julie Gianni (Diaz – “Any Given Sunday”, “Shrek”, “Charlies Angels”) who unknown to Aames has fallen in love with him. When his best friend, Brian (Lee – “Mallrats”, “Dogma”, “Chasing Amy”), introduces his new girlfriend, Sofia (Cruz – “Captain Corelli’s Mandolin”, “Blow”), there is an instant attraction between she and David, and for the first time Aames feels love in his life. However, Julie is not taking the news too well and in an insane rage she drives herself and David off a bridge in a horrible car wreck. Julie dies in the crash, but David survives and is horribly disfigured. Now the playboy millionaire must try and get through life without his looks and with his confidence shattered.

We cannot say too much more without spoiling this labryinth of a plot. The movie opens with a masked David talking to his lawyer (Russell – “Breakdown”, “Soldier”, “Executive Decision”, “Tombstone”) and using flashbacks we piece together the story of how he found himself behind bars. As we come up to “present day”, things move forward and the last fourty miniutes or so are lost in a rather curious science-fiction rabble that will either float your boat or not. As it happens it worked very well for me, and by the end we find the answers that are more than satisfactory, assuming you are willing to lose some clarity and use some suspension of belief.

Cruise is surprisingly adept at portraying the swinging fortunes of David Aames. Lets face it he is a walking playboy

anyway and his suave personality combined with his ample six-pack means it is a tailor-made role. It is when he plays the broken, angry and disfigured Aames that we see Cruise at arguably his career best. Cameron Diaz plays the psychotic jealous lover perfectly. She probably won’t be mentioned for a supporting actress lawyer, but a few more turns like this and the beautiful young lady could find herself in one of those five squares on our TV screen very soon. While Russell and Lee also put in enjoyable and believable performances as Aames closest male countenance, Penelope Cruz is somewhat unbearable as latin lover, Sofia.

Cameron Crowe should receive plaudits for handling the less than conventional story in as conventional way as he possibly could. Although for a lot of the movie various scenarios will play out in your head, the unorthodox conclusion should leave you satisfied. It certainly ended up being a thrilling and intriguing experience for me. This should be one of the movies of the year.