It’s almost fifteen years since Denzel Washington’s big breakthrough as Steve Biko in 1987 smash-hit, “Cry Freedom”. Since then he has become recognised as one of the finest actors of this generation with acclaimed performances in movies like ‘Glory’, ‘Malcolm X’ and ‘Philadelphia’. He notches up another tick in the success column with a remarkable performance in the title role of “The Hurricane”. Norman Jewison (“Moonstruck”, “Jesus Christ Superstar”, “Fiddler on the Roof”) directs the story of boxing prodigy, Rubin “Hurricane” Carter (Washington) whose life is turned upside down by his wrongful conviction for murder.

Having spent half of his first 20 years in juvenile prison thanks to the close attentions of a racist police officer (Hedaya – “The Usual Suspects”, “Shaft”, “Maverick”), Carter focuses his anger and aggression to become one of the world’s leading middle-weight boxing contenders. The fame and fortune it brings him helps fuel racist fires in the local police department and when the opportunity arises, Sgt Della Pesca uses a heinous multiple-murder to frame and jail Carter. A subsequent re-trial fails to free him, appeals are rejected and Carter uses the time in jail to write his autobiography. Young student, Lesra Martin (Shannon – “Deep Cover”, “D2 – the Mighty Ducks”), comes across the book and becomes engrossed by Carter’s story. Fully believing in his innocence, Lesra begins to write to and visit Carter in jail. His tutors (played by Schreiber, Hannah and Unger) also believe in Carter’s innocence and they plough their efforts into disecting the evidence at his trial and trying to prove his innocence.

There is no doubt that the outstanding aspect of this movie is another ‘tour-de-force’ performance from Washington. 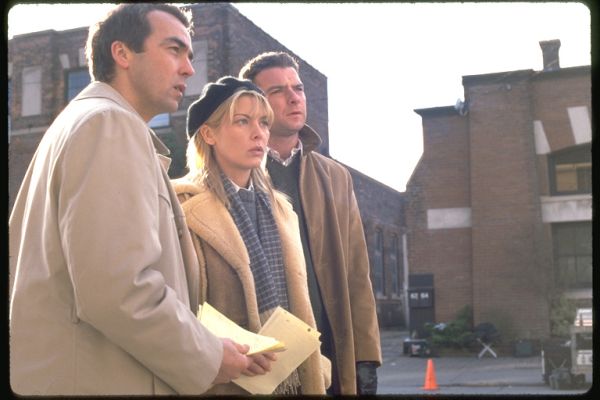 His touching portrait of a wrongly-convicted man evolves brilliantly as the movie progresses. The aggressive boxer soon becomes the focused writer whose only goals are freedom and justice. His support cast also receive kudos. Shannon is superb as Carter’s guardian angel and mental strength during the hardest periods of his struggle, while Hedaya is the perfectly evil racist cop.

Jewison is not the most prolific movie maker but if he rolls out classics like this once a decade I’ll certainly always look forward to them. My only regret is that this is marketed as the true story of Rubin Carter when in reality a lot of the facts have been changed to make the movie more dramatic. I guess that happens all the time but it seems a bit tasteless where the lives of innocent people are concerned. But beyond that, this is an absorbing and thoroughly deserving movie experience.