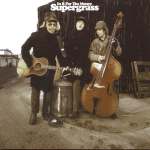 Supergrass had long running popularity on the independent circuit before they finally hit it big with their feelgood anthem, ‘Alright’ in 1995. One might say that the popularity of that track invited the cries of ‘sold out’ as every Tom, Dick and Harry embraced the three scruffy upstarts debut album, “I Should Coco”.

Their second album was preceeded by the release of the singles ‘Going Out’ in 1996 and ‘Richard III’ several months later. The indication was that this was going to be a fine record as both these songs were quality. We were certainly not to be disappointed on what is a far more mature album than the debut disc.

‘Going Out’ is an addictive foot-tapper while ‘Richard III’ was a riff-heavy rocker; two very different sounding songs. The quality doesn’t stop there though. ‘Late in the Day’ is arguably the best cut on the record with an easy-going acoustic beat, haunting vocals, dapper keyboard and an absolutely wonderful chorus. Brilliant stuff.

The title track is lead by a mauling ‘in it for the money’ chant and explodes into an exquisite horn-enhanced conclusion, ‘Sun Hits the Sky’ is reminiscent of fun summer hits of the eighties, ‘Hollow Little Reign’ is a lovely souped-up bar-room tune and ‘G-Song’ survives nicely with a familiar stop-start style riff, another cool chorus and a fantastic musical mid-section.

Gee, I like all of it really bar maybe ‘Someimtes I Make you Sad’ which is clearly a purposefully strange diversion featuring a ‘fairground’ keyboard sound and a continuous ‘human grunt’ rhythm. Bit odd.

Supergrass have pretty much hit the bullseye here with an album that is among the best British albums of the ninties and certainly a lot better than the last effort from four certain Mancunian boys.