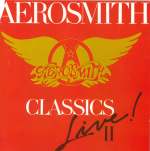 The follow up to “Classics Live!” came a year later and was of a similar quality to the original. With the exception of ‘Draw the Line’ [1978] and ‘Let the Music do the Talking’ (1986), all recordings came from 1984, just prior to the release of “Done with Mirrors”. How the band must have wished they could come up with more classics like these for that album.

The regular concert opener at the time, ‘Back in the Saddle’ launches in enigmatic form, Whitford and Perry causing an electric current of energy that would rival any live performance. All time classic, ‘Walk this Way’ is introduced with a ‘Happy Birthday’ sing-a-long to Tom Hamilton (new years eve) and is performed as well as ever with the new chorus style that evolved over time already in place.

‘Movin’ Out’ is given an airing here due to the recent re-union of Mssrs Tyler and Perry and the fact that this was the first song they wrote together. It is interesting to here it live but it has always been a rather mediocre tune to me, although the mellow mid-section sounds excellent.

The all-out action blast of ‘Draw the Line’ is as memorable as ever and ‘Same Old Song and Dance’ builds the anticipation greatly by teasing everyone with a false intro for about 30 seconds. Vocally though, Tyler sounds tired.

The itchy attraction of ‘Last Child’ is the best performance on the album with Whitford and Co creating a groove than sounds even better now than it did eleven years before. ‘Let the Music do the Talking’ is the only “Done With Mirrors” track included although I wish it had have been ‘My Fist Your Face’.

The finale couldn’t be more fitting – ‘Toys in the Attic’ – the duel vocal assault of Tyler and Perry showing that they are indeed back in the saddle again.

A good album indeed especially with the inclusion of the “Rocks” tracks.