I’ve been to Chicago a few times and no matter how hard I try, I can never imagine it looking the way it does in “I, Robot” come 2035. Alex Proyas’ (“The Crow”, “Dark City”) futuristic action-thriller throws all the space-age visuals that his budget allows.

Most of the budget is spent on the rather stunning robots that the movie title refers to. The NS-5, manufactured by a company called US Robotics (USR), is a next-generation, robotic, personal assistant that will protect you and obey your every command, as long as it doesn’t conflict with the Three Laws of Robotics. 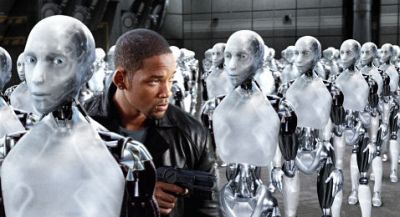 Simple stuff, right? But techno-phobic cop Del Spooner (Smith – “Ali”, “Independence Day”, “Bad Boys”) doesn’t trust the robots. He doesn’t trust technology at all as it happens. Everyone else switches on their stereo with a voice command but he uses an old-fashioned battery-operated remote control (imagine!). We guess that his aversion is something to do with the disturbing dreams he has of a robot rescuing someone from a car submerged underwater, but we’re not given a lot of information about this initially.

He is renonwed for his hostility to the robots that everyone else pretty much depends on in everyday life. He effectively tells his robotic mailman to get bent, and then wrongly apprehends a robot that he spots running down the street with a handbag. Turns out he’s bringing a desperate woman her inhaler.

When he hears about the suicide of the inventor of modern robotics, Dr. Alfred Lanning (Cromwell – “Babe”, “The Green Mile”, LA Confidential”), he immediately suspects something that no one else does – murder. What’s more, he suspects that the murder has been committed by a robot called Sonny. USR psychologist Dr Susan Calvin (Moynahan – “The Sum of All Fears”, “Serendipity”, “Coyote Ugly”) tells him that it is impossible as it would conflict with the Three Laws. Mega-rich USR owner Lawrence Robertson (Greenwood – “The Core”, “Thirteen Days”) agrees with Calvin and ensures that a robot taken in to custody by Spooner is returned to him. With the NS-5 about to replace the previous NS-4 model, Robertson can’t afford any bad publicity.

Spooner says that Sonny is different – everyone says that Spooner is paranoid. With the NS-5 about to be unleashed, the robots may be set to take over the world.

Isaac Asimov’s book “I, Robot” forms the cornerstone of the movie. Rather than being based on the book (which was a collection of short-stories describing the relationship between men and robots), it merely builds on the basic ideas and produces a science-fiction thriller that comes up short in most categories. The visuals and general “futuristic feel” are decent but no better than “Minority Report”, for example. The robots themselves are striking looking and feature some great computer-aided animation but Proyas kind of drops the ball by not featuring them more prominently. This is not a movie that can survive on script and storyline alone so he should have overdosed on the special effects.

The shabby script hinders Will Smith considerably. Smith is better when he’s in good wise-cracking form like in “Bad Boys” or “Independence Day”. Playing a grumpy, paranoid cop with forced lines is a role more suited to the Bruce Willis of ten years ago. His support cast are very unspectacular. Bridget Moynahan tries her best and improves once the lab coat is off and she lets her hair down. Bruce Greenwood’s character is a stereotypical millionaire who adds little and James Cromwell is featured so little it’s criminal.

The pacing of the movie is very uneven. There’s little build up with Lanning’s character, any relationship that Spooner might have with him and no reasons given as to why he has such a problem with the robots. We learn it all eventually but cannot immmerse ourselves in the storyline slowly. Why should we trust Spooner? Because the movie promotion says we should?