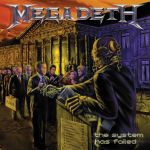 When it comes to great career moves in the life and times of Dave Mustaine, there are few fans who would identify 1999s maligned “Risk” as one. However, such was the uproar that accompanied its release, anything that comes in its wake will be seen as a triumph. In 2001 the band, newly signed to Sanctuary, released “The World Needs a Hero”, supposedly a return to their metal roots. But it was a disappointment, marred by uninspiring and weak songwriting. It still gained widespread praise, more because of what it wasn’t than what it was.

The band split the following year, Mustaine needing a year to recover from an operation to treat radial neuropathy, an injury that left him unable to play guitar. During his time off he worked on re-mixing and re-releasing his entire back catalogue, writing new material at the same time. When 2004 rolled round and his record company clamouring for a new album under the Megadth banner, Mustaine put together a “new” Megadeth including guitarist Chris Poland who played on several of the bands 80s releases. “The System Has Failed”, complete with typically biting artwork, was unleashed in September 2004.

The sound of jet fighters flying overhead in ‘Blackmail the Universe’ immediately throw you back to happier Megadeth times, namely the high-quality production-fest that was “Rust in Peace” and “Countdown to Extinction” from the band’s golden era. The track itself does the era justice, a raucous and untamed critique of world politics, perhaps American foreign policy. The newscaster voice-over sets the scene, telling us that ‘Air Force One has been shot down’ and that ‘The presidents whereabouts are presently unknown/And he is presumed missing’. With the nation of DEFCON3, Dave covers his nation’s colours with the line ‘red, white and blew it’ and tells us that ‘Nuclear battlefields (are) energised’ and ‘Cold wars are heating up again’. With a number of super solos from Poland and Mustaine and some of his best lyrics in a long time, this ferocious aural assault is typical Megadeth. Compare to their last album opener, ‘Disconnect’. There is no comparison.

‘Die Dead Enough’ is one of the album’s surprises despite initially fearing the second coming of ‘Blood of Heroes’ or perhaps ‘Promises’ in the early seconds. A definite nod towards the more melodic side of Megadeth it weaves itself around even the most hardened brain with it’s infectious sound. Possibly the words of a man fighting to stay alive, Dave talks about how he ‘can’t stay down enough/can’t take pain enough/can’t bleed fast enough’ and how he ‘can’t die dead enough’. The rhythm section of this song is just magnificent with a double-bass beating savagely in the background.

‘Kick the Chair’ was one of the first songs to be debuted on the Internet and certainly made a splash with fans. Think ‘Take No Prisoners’ but with a slight backward step in songwriting to, say, ‘Devil’s Island’. A damning indictment of the justice system (‘Justice means nothing today/Now that the courts are for sale’), Mustaine is unrepentant in his verbal assault on the legal cogs that turn in the country today – ‘Kick the chair/The rope’s tight … Friend or foe/Ya gotta hang em dead’. While the song is not quite as strong as the previous two, the solos from Mustaine and Poland are outrageously good and show us how “The World Needs a Hero” was actually a false dawn.

There are two pairs of songs that I group together on this record because I’m not entirely sure what to make of them yet – although I’m leaning towards a full-on thumbs-up. ‘The Scorpion’ is an, initially, brooding track that roars in to life for the catchy chorus on the back of a graceful bridge. A song about a human parasite (‘As I climb onto your back, I will promise not to sting/I will tell you what you want to hear and not mean anything’), Dave might indeed be talking about someone close to him – perhaps himself (‘My self I’m centred in…I dream to be left alone’).

Following up in a similar vein is ‘Tears In a Vial’, a bit more akin to mid-90s Megadeth than before. Mustaine has been sentimental in the past (‘I’ll be There’, ‘Promises’), but this seems to be a lament his former bandmates more than a song about lost love. ‘How I could walk away from something so rare’, he starts, ‘But you see it got too demanding/And I just didn’t care’. Perhaps commenting on the division in his band in the 90s, he claims that it ‘sucks to be taken for granted’. But as the track draws to a close, he is either talking about a woman or comparing his former band to one – ‘You were so beautiful to look upon … Until all your good looks betrayed you … Your eyes are empty windows, broken/The body may be here but the soul is gone’. Interesting and ultimately a decent cut.

On ‘Back in the Day’, Dave is in fairly bitchy mood. He asks ‘Where were you when it happened?’ and we soon find out he’s talking about the 80s metal scene (‘Were you at the front of the stage?/Or in the underground?…The world of metal changed forever/Back in the day’). After a brief exchange of solos between Poland and Mustaine the song changes tempo brilliantly as it takes on a more-slowed down army-style beat. Clearly Mustaine is in love with the life he led back then -‘This is our way of life/A life that was born free/To fellow orders how to live/Was never meant to be’. And sticking two fingers up at the new breed: ‘Metal’s king back then/Still to this day/Others imitate or challenge/But it never goes away’. Uplifting brilliance.

‘Something That I’m Not’ chugs along with a decent little riff until Mustaine once again bridges with a fine little solo. The chorus will remain with you, no more so than the indelible title-line: ‘Its something that you are, something that I’m not’. With the great bass work again from Jimmie Lee Sloas and superior drumming from Vinnie Colauita, you’d think they were in the band for 20 years rather than 20 minutes.

In the middle of all that is a cool, but shoulder-shrugging, 40 second ode to Jack Kennedy – ‘I Know Jack’. Let’s just say it provides the buffer in the middle of the record.

‘Truth Be Told’ goes biblical. Mustaine brings us back thousands of years (‘This is the first tale of death in the world/When Cain struck down Abel, a family broken’), right up to modern day (‘There’s no such thing as peace/Till death do us part’). Visually, he creates a chilling image (‘Sin lies at the doorway/Hell’s open for business/The soil cries out for revenge’). The chorus is turbo-charged compared to the more halcyon verse, and the speed metal-esque final minutes once again recall the glory days from the late eighties and early nineties.

‘Of Mice and Men’ has been amongst the least well received of the new tracks but I quite like it. Dave paints us a portrait of his life (‘Back when I was just 17/I thought that I knew everything…I was legal now at 21/I knew the way the world should run…At 25 I was suprised/That I was even half alive/Somehow I managed to survive’), tells us that he’d love to live it again (‘As Gabriel sounds my warning bell/I’d buy your life if you would sell’), and sends a warning shot out (‘So live your life and live it well/Theres not much left of me to tell/I just got back up each time I fell’). It’s maybe the chorus that lets the track down, ‘unconvincing’ perhaps the word that best suits.

‘Shadow of Deth’ recites a prayer to God, dresses it up with a maniacal riff and a searing solo to add that little bit of dressage to the whole chapter. Interesting, and especially so when put in context of the final track.

‘My Kingdom’ is typical album-closing Megadeth (‘Fff’, ‘Victory’, ‘Time: The End’), brought to shore by the wave that was ‘Shadow of Deth’. Strong religious and medieval imagery in the use of the words ‘chalice’, ‘dragons’, ‘sword’, ‘beggars and Kings’ and ‘necromancer’ help to build an identity for what is otherwise a moderate track.

Overall this album is shocking – in a good way. Mustaine has (not literally) come back from the dead with one of the best album’s of his career. It isn’t “Rust in Peace” or “Countdown to Extinction” but it’s less than a notch below them and certainly ahead of well received output like “Cryptic Writings” and “Peace Sells”.