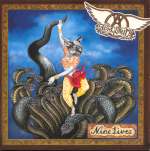 I’ve felt recently that Aerosmith are somewhat an under-valued band in the higher echelons of music critique. They are, of course, my favourite band and as a result I am fairly biased. But when you see the praise heaped on other long standing bands of twenty years plus (Rolling Stones, Bee Gees, The Who), it makes you wonder what bands like Aerosmith have to do to get the recognition they deserve. Their albums are normally met with a clearly defined divided reaction – half of the critics are fans and subsequently gently praise their efforts while the other half have a bit of a snigger at the ageing legends, pan the albums and spin their latest fad CD.

“Nine Lives” was an album that encountered such a reaction on its release. It was a long time coming for a record that had encountered many problems along the way: various internal arguments, rumours of drug abuse for a band that had been clean for 10 years, the sacking of long time manager Tim Collins, various producers and a general feeling of fatigue.

The results therefore are somewhat predictable; moments of mastery mixed in with elements of mediocrity.

This album is very much about diversity as Aerosmith aim to tread some new ground. There are no better examples of this than the songs that touch on the drug abuse experience of the past. ‘The Farm’ is one of the best Aerosmith cuts ever, heavy and aggressive, placing the listener in a sort of parallel universe and ‘Crash’ sees them crossing into the punk genre for the first time with Steven Tyler even adopting a pseudo English accent.

There are some other good rockers here; ‘Something Gotta Give’ is a reasonable guitar-driven track with a line that is set to become a t-shirt print of the future (‘does the noise in my head bother you?’), the title track is reminiscent of Aerosmith rockers of the seventies and ‘Falling in Love (is hard on the knees)’ is quintessential Aerosmith, sexual innuendo and horns a la ‘(Dude) Looks Like a Lady’.

Aerosmith are of course masters of the ballad and ‘Hole in my Soul’ is an emotional but predictable cry from the heart not too dissimilar to their classic, ‘Dream On’ and ‘Kiss Your Past Goodbye’, while an average premise for a ballad, is musically superior to much of the album. The best one here though is ‘Ain’t that a Bitch’ which is set for classic status too. It opens with a lone saxaphone setting a scene suggestive of 1940s New York and the lone man in the trench coat and hat. A bit like that David Bowie video, ‘Absolute Beginners’. It then explodes into an emotional tirade, telling you that ‘love is like the right dress on the wrong girl; you never know what you’re gonna find’. A case of once bitten, twice shy maybe.

Other tracks on it worth catching are ‘Pink’ (a catchy acoustic number featuring the trademark harmonica and tinged with pleasant harmonies) and ‘Attitude Adjustment’ (another tale of love gone wrong).

There are some decidedly weaker moments; two of the weaker moments were pencilled in as singles actually. ‘Taste of India’ is a mediocre rocker with an indian sound, ‘Full Circle’ sounds like a “Get a Grip” leftover and ‘Fallen Angles’ is an eight minute otchestral ballad which, while sounding terrific, is about 5 minutes too long.

I’ll praise this album as a very good effort, and perhaps with the exception of “Pump”, their best since 1976. I say respect the Boston bad boys; they do it for you you know…